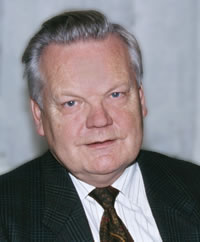 Doctors from the Medical
University of Minsk in
specialist discussion with the
head of the Special Care Baby Unit
at the University
Children’s Hospital in Magdeburg,
Dr. med. Avenarius,
whilst the children listen to their
‘medical concert’.

You have asked me for my specialist opinion on Medical Resonance Therapy Music®. I would like to comment as follows: the scientific test results and clinical observations of the past seven years clearly show the healthy effects of this music in various medical fields. In particular, the investigations of headaches, sleeping disorders, and dispersing psycho-physiological manifestations of stress, show the great significance of this method for the use in health care.

The effects of Medical Resonance Therapy Music® have gained the recognition of world-wide renowned scientists and doctors – as e.g. of Nobel prize-winner Prof. Ilya Prigogine from the University in Brussels, and Prof. Dr. Paul Rosch, the president of the American Institute of Stress, the world's leading Stress-Institute – and they have been acknowledged by our Medical Journal Saxony-Anhalt, right up to the World Health Organisation (WHO).

Furthermore, the use of this music in my own clinic presents a convincing picture of the medical quality of harmonically structured music. It was introduced in the intensive-care unit for premature babies in 1992 by my colleague Dr. Avenarius. Some members of the medical and nursing staff gave their approval, others, however, were sceptical. And, as additional therapy it also means more work for the nurses and doctors, the music was only able to succeed on the basis of its obvious positive effect on the premature babies. The sceptics, too, could, in time, convince themselves that the babies evidently feel well with the music, and come to rest much faster after stress inducing operations.

And the practical consequence was that the initial additional work soon resulted in reduced complications and less work for the nurses. The best proof for the popularity of this method on the intensive-care unit may be the following incident: when a mother gave a donation to the intensive-care unit, the nursing staff decided to use this donation for the purchase of further CD players and CDs for the premature babies.

Due to the radioactive overdose of the pregnant women in the wake of the nuclear disaster of Chernobyl , the gynaecologists there have to struggle against a flood of complications during pregnancy. During extensive scientific investigations, Prof. Gerassimowitsch and his colleagues were able to find out that Medical Resonance Therapy Music® has an extremely positive effect on many of these complications, and he soon decided to make this method a compulsory treatment for all pregnancies involving risks.

The result proves him to be right: he was able to report to our faculty that, since then, his clinic has clearly registered fewer miscarriages, and that there have also been no deaths caused by gestosis since then. And the positive healthy effects of Medical Resonance Therapy Music® were soon picked up by the local Ministry of Health: on the basis of many and diverse investigations, and many years of practical experience with Medical Resonance Therapy Music®, it is nowadays officially recommended to the country's doctors.

This example is worthy of imitation for all Instituteions which have devoted themselves to health care. I believe that a health insurance company, e.g. which pays for Medical Resonance Therapy Music® – if its use is prescribed by the doctor – will have the same experience as the initial sceptics among my team in the intensive-care unit for premature babies: the additional expenditure for prophylaxis is soon reflected in reduced costs as a result of non-occurring illnesses.

I would really welcome it if the key players in Germany today, with the knowledge of the situation described, would take the necessary step toward this natural, scientifically sound health care with Medical Resonance Therapy Music®: a lower expenditure as a result of absent diseases would be the result. Finally, let me mention why I particularly appreciate Mr Huebner’s actions: he puts research into Medical Resonance Therapy Music® within the bounds of scientific medicine, and into the hands of medical experts. At the same time, he completely abstains from any populistic action – which would surely be easy and financially lucrative, considering the, at first glance, extraordinary method with such extraordinary effects.

For seven years, Mr Huebner and his team have been putting Medical Resonance Therapy Music® up for medical discussion at important medical specialist conferences. This action must be absolutely welcomed, as this enables every doctor to give it serious thought, free from any media pressures. And the fact that this method is spreading especially among the medical profession speaks for its medical quality. I wish Mr Huebner and his team the same enthusiasm in their responsible activities for the future.