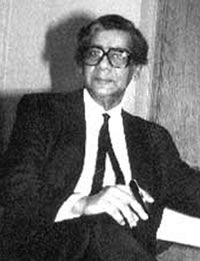 is a world-respected medical researcher and simultaneously an avid poet, who comes from a reputable Indian writers and poets family.

He is the founder of the Research Laboratory for Diagnostic Endocrinology at the University of Tübingen’s Children Hospital and is its director since over 20 years.
As a pioneer of psycho-neuro-immunology his interests lies above all in the effects of the emotional world of the expectant mother on the development of the brain functions of her child.
He expects that a music which applies the functions of the harmony laws of nature in a scientific manner, will cause a deep harmonization of the emotional world of the expectant mother and will thus able to neutralize the highly harmful effects of STRESS on the brain development of her child. At Prof. Gupta’s invitation Peter Hübner opened his symposium “Neuroendocrinology - Quid Novi?” – at which the leading hormone researchers of the world had gathered – with the world premiere of Medical Resonance Therapy Music®. The interest in this science-based music was very high among the hormone researchers and from there the music went into medical research worldwide.

at the symposium “Neuroendocrinology - Quid Novi?” on the occasion of the world premiere of Medical Resonance Therapy Music® at the University of Tübingen in the presence of the leading endocrinologists of the world:


“Medicine and education urgently need an objectively effective means without harmful side effects, to protect the child's brain development against the devastating effects of STRESS.”
With kind permission of AAR EDITION INTERNATIONAL
© 1998- SCIENTIFIC MUSIC MEDICINE | Contact